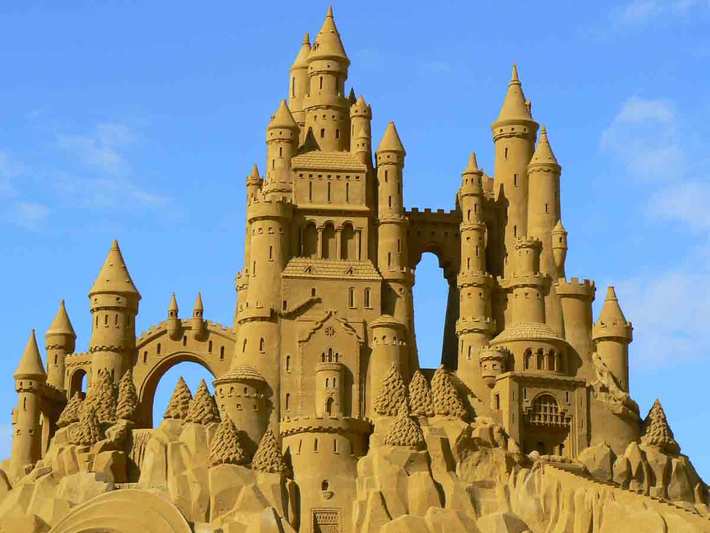 Pocket came home covered with sand. Blake, who never gets angry, was annoyed that she had to clean the floor again after doing it a few hours earlier. Out of all your dogs, she is the most like her mom.

Pocket doesn’t like getting dirty, so her being sandy is strange. The next day she got up early and slipped out of the house. I am a sensitive sleeper and heard her jump down, so I followed.

She walked down to the beach and stopped by a massive sandcastle. I didn’t mean to expose myself, but I was shocked when I sat it and barked at Pocket, asking if she had built it.

Pocket was startled when she heard me, then ran into the sandcastle. I followed her into the entrance and found myself in a giant foyer lit by candles on the wall. I called her name and then saw a suit of armor on the wall moving, and I told Pocket to take it off and stop being silly. Suddenly the knight removed a sword and thrust it at me.

“Pocket! What are you doing?” I asked, then I heard a yip behind me, turned and saw Pocket hiding in a corner and frantically motioning at me to join her. I looked back at the knight, who had lifted his sword in the air, ready to cut me in two, I ran to the corner almost getting cut in half when he swung.

“Pocket, what have you done?” I asked

“I don’t know. I built this castle and came back to play with it in the morning, and the place is filled with knights, maidens, and kings. None of them will listen to me.” I asked Pocket an important question: Had she wished her castle were real. She sheepishly admitted she had.

When you’re an excellent angel like Pocket, and you wish for something to become real, sometimes if you do it when the sun is at a certain point in the sky, and the winds carry wishes, it is granted. That is when the real troubles start.

The knight cornered us, and the king appeared. He asked what we were doing there, and Pocket tried to explain about her imagination. One of the Queen’s ladies declared Pocket a witch. The king announced they would boil her in oil when I suggested a trial by combat.

I had no idea what combat Pocket could win, but it would buy us time. Then she asked if she could have a champion participate for her l, and they said yes. I hoped she would pick a big, hulking man, but she chose me.

And that is how I ended up on a pony with a lance in my hand, ready to do combat with a giant called the Beast. Pocket would be boiled in oil and put in prison if I lost, and I would probably be with her. The Beast began galloping towards me.

Posted by Foley Monster, Pocket and River Song at 8:57 PM