Cali and Hurley are our October 24 pups of the week 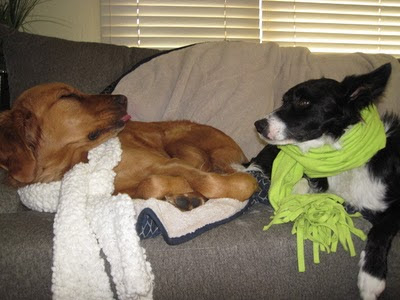 We must admit here, right off the bat (a metaphor for the upcoming World Series between the Rangers and this pairs favorite team, the San Fransisco Giants) that Pocket and I spend lots of time reaching across the series of tubes that make up the Internet, and the entire country, to out west coast friends, so in our hearts these two are always pups of the week.

But we can't pick who we are closest to each week to wear the POTW crown. If so it would pass between Pocket and I ad nauseam and I try not to use the words Pocket and nausea in the same sentence because it make my tummy rumbly.

But this week has been a torturous roller coaster ride for our pups of the week Cali and Hurley. Their beloved grandma, their Daddy's Mom, a special woman who was loved by her daughter-in-law (wives and mothers-in-law traditionally get along like Yorkies and squirrels), and who wore her Giant socks every night (I don't know if they had the team logo on them or were just really big) held on as long as she could, but the train for the bridge arrived, and she had to leave her broken-hearted family, for dozens of dogs waiting for her, and many more family members, who welcomed her to her permanent home..

Now comes a very difficult time for Cali, Hurley, and their parents, when they have to gather together and say their final goodbyes to their wonderful Grandma.

They haven't been on the Brigade in the last few days while they deal with their grief. But even while they were gone they taught us a wonderful lesson, that miracles can occur.

I hope Cali and Hurley, and their Mom and Dad, were able to enjoy the Giants miraculous win over the Phillies despite their grief, but I believe they did, because they know the victories could not have been won without their angel in the outfield.

So here is to Cali and Hurley, our pups of the week, who showed us that even in our darkest days, when smiles seems impossible, there are Grammy and Grammies, Aunts and Uncles, Mommies and Daddies, and Pup Bridge angels, who, when we least expect it, can sneak in a miracle, and make us smile.

So nothing against you fine Ranger fans, but these two pups are going to be rooting for the Giants, for Cali and Hurley, and for their angel in the outfield.

Because sometimes baseball is about baseball, and sometimes it's about faith.
Posted by Foley Monster, Pocket and River Song at 8:33 PM

Email ThisBlogThis!Share to TwitterShare to FacebookShare to Pinterest
Labels: Cali and Hurley, Pup of the week, Tanner Brigade