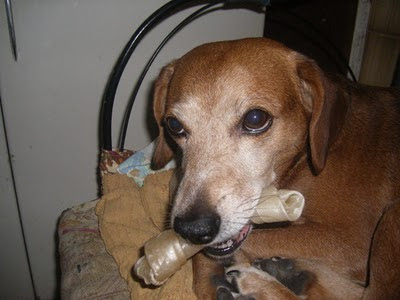 This has been another hard week here at The Tanner Brigade. There is a pup who my heart says I should make pup of the week. He went to the bridge in the most violent of circumstances. But our old friend Petey said any tributes would make his Mom's suffering worse, which we certainly don't mean to do. But he and his Mom are in our hearts and prayers.

We had named this Pup last week in our list of those who could be Pup of the Week last week, but as dire as his circumstances were last week, they have even got worse this week as we learned his Grandpa was ill.

But there is another reason to name this good boy Pup of the Week. Today is his birthday. Or yesterday was his birthday because time is different wherever you go. Another one of those stupid human things.

So, if you have yet to deduce, our Pup of the Week is our Italian friend Paco. As they say in Italy C'est Magnifique. (Pocket just got snarky and told me that this is French, not Italian. Well, I'm sure French people say this in Italy. They must be allowed to speak French in Italy. So back off little sister.)

We do love Paco. He posts the cutest comments, especially when we use pop culture references and phrases he is unfamiliar with. He's also the sweetest pup, never a bad word to bark at any pup.

We hope his Grandpa does better, and Paco's health concerns are treated easily, and that he has enjoys birthday number twelve, even if it's already over, or if it hasn't happened yet (really why can't we be the same day and time everywhere humans?)

We would be remiss if we did not give special mention to four of our favorite pups: Fred, Junior and Luca; and Hattie. We had a little misunderstanding between members this week (not them). Some nipping, some snarling, some hurt feelings. Hopefully we have put all the unpleasantness behind us. We could not have done so without the patience, the understanding, and the persuasiveness of these pups and my tip of the tail to my valued Consiglierees.

So happy birthday Paco and happy Pup of the Week week. You are truly deserving.
Posted by Foley Monster, Pocket and River Song at 9:26 PM