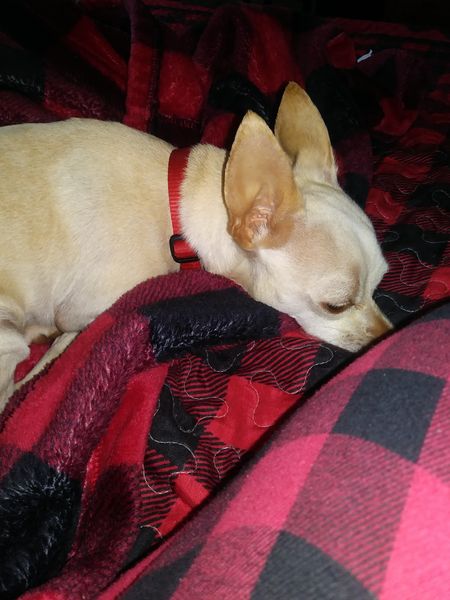 Even before Mouse went to the Bridge, the Min Pin gang knew their mom was a person who would not be happy unless she was living with a dog.  They had a secret that they didn’t share with Mouse during dream visits.  Before her passing, they began interviewing homeless dogs who could repair their mom’s, broken heart.

Mouse was his mom’s heart dog and knew her better than her siblings, so she immediately called a family meeting when she crossed the Bridge.  She told them that they needed to start interviewing homeless dogs.  Her siblings grew uncomfortably quiet, and Mouse inquired why. “We’ve already been looking,” Cricket Anne said.

“You were interviewing my replacement before I was ready to depart?” Mouse asked indignantly.

“We couldn’t wait,” Teenie explained. “Every day that mom lives without a dog will be harder for her.  But, we decided to give you the right of final approval.”  Scooter showed her the dog resume and videos.  Mouse put them in his mouth and went to the TV room to study them.

After watching the video, Mouse emerged and announced that she had made a decision.  The newest dog and potential gang leader of her own was a tiny dog named Minnie.  She is a two-year-old pup who was found running in the streets of Chicago during a snowstorm.  The Chicago Animal Control saved her.  They found she had no chip or collar.  She was spayed and taken in by a rescue.  “She is perfect!” Mouse announced.

“We’re glad you feel that way,” Teenie said. “We already offered her the position.

“Before I had the chance to vet her?”  Mouse exclaimed.

“We knew you’d pick the right one,” Tennie said. Still, the fact that such an important decision was made without her input aggravated Mouse. She had forgotten how hard it was to control a group of rambunctious Min Pins.

Mouse was intent on seeing Minnie before her mom adopted the pup. Five minutes after meeting her, Mouse knew she was a perfect addition. She was both sweet and funny. She had traits of each member of the Min Pin Gang but not so much of an individual’s ones that Minnie would remind her mom of her lost dogs.

Now that the pup was selected, the Min Pin gang had to convince their mom in her dreams that getting another dog and her being happy was all they wanted.  Mama Betty had been  thinking about another dog. She woke the following day, knowing her gang was enthused about her getting the pup.   She did not remember the dream, but deep down,  Mama Betty knew she had received their seal of approval.

There were a few minor hurdles that needed to be cleared before Minnie moved into the gang’s home. One of them was approval from the rescue, but it would be evident to anyone who spent a minute with Mama Betty that there was no better do mom around.

At week’s end, Minnie moved into her new home.  She found that everything smelled like her new friends who rewarded her with this beautiful home and family. She had been told how to emulate her predecessors and make her mom smile.   In less than two weeks, Mama Betty had another little heartbeat in her house, as well as the patter of four paws on the floor.  It is the most comforting sound she could hear.

There is still sorrow in the house and will be, but little Minnie is a sorrow buster and smile creator, and that is the remedy to drive the sadness out like an exorcist does the devil.