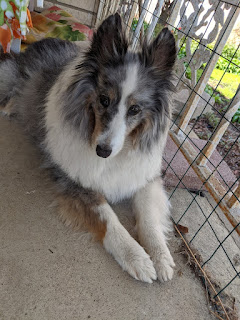 I have been an angel for a long time.  I came to the Bridge more than eight years ago.  I am approaching the tipping point: I will have been at the Bridge longer than I was mortal in five years.  In that time, I have learned never to be shocked when a friend passes over.  But, there will always be unpleasant surprises.

This week, when I got summoned to Hobo's Landing to swear a friend, I was stunned to see, beautifully walking over the Bridge, with her fur billowing in the wind, my friend Dooli.
I knew Dooli was a senior, having celebrated his 13th birthday earlier this year, an age I didn't reach.  I had not heard any chatter or received any prayers about him doing poorly except for arthritis and some hearing loss.     I wish I had known.  I would not have been able to change the outcome but could pave the way for my friend.
All dogs love life in the mortal world, but Dooli's seemed to be incredibly blessed, with loving parents, long walks, fun in the yard, a loving, playful sister in Dasy, and an idyllic life.  How could leaving them all behind, and arriving at the Bridge, hold a candle to his beautiful mortal existence?
Dooli leaves behind shattered and broken-hearted parents and Daisy, who is also in mourning.  She is going to have to put aside her grief to comfort her parents.  Because we dogs are open to the unexplainable, she will see and remember Dooli in her dreams.  But, it is not the same as being a constant presence.
When word spread of Dooli's arrival, the friends he made during his life and the angels who were blessed to live with his parents before he became part of the family.  They wanted to help Dooli find the beautiful smile he constantly wore with his parents, washed away in the sorrow he felt in losing his family.
Even without his usual happy face, Dooli still took our breath away with his natural beauty.  We angels knew where Dooli's smile was, still in his heart but covered with grief and sadness.  We welcomed him with hugs and kisses, then gave him a massive party.  Finally, some of the Golden Girls, and Labbies, who was born to run, engaged him, and Dooli was racing through the countryside, where he found his smile again.

He still wears it sporadically, always when visiting his mom's dreams or around other dogs, but it slips away when he is alone.  Smiles are like a broken limb.  It heals, but it takes time.  I can't wait for the day that Dooli's broken smile, and those of the people who loved him, shine brighter than the moon at dusk.