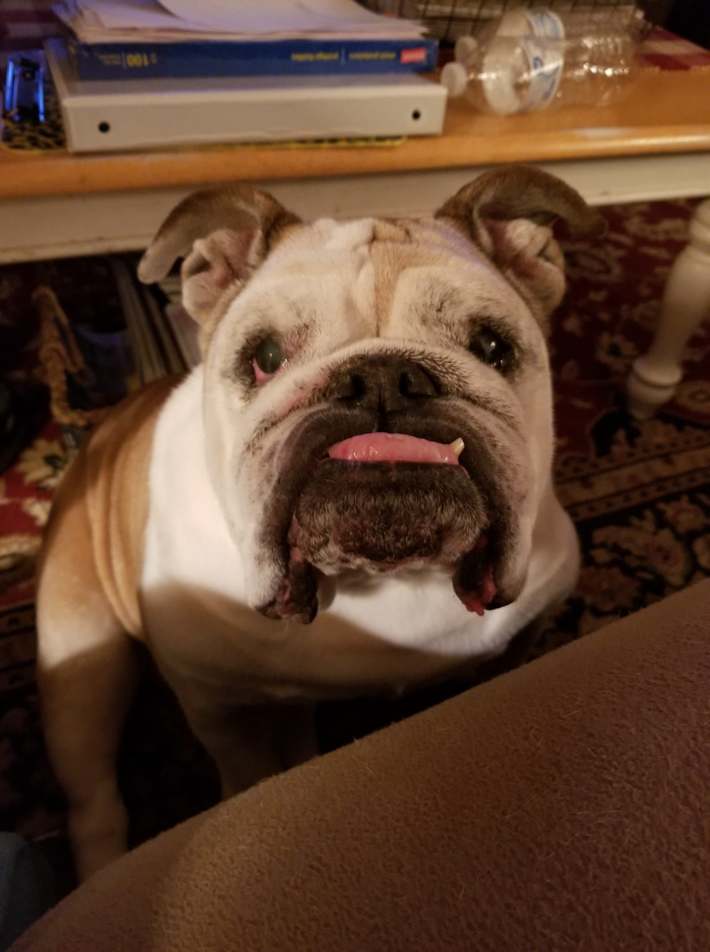 No dog wants to come to the Bridge unless they have survived their humans' passing.  Sometimes they are so reluctant we have to send another dog to summons them.  When it was Lucy's time, and she did not appear, we sent Nigel, who selected Lucy and her sister Carli to replace him, to summon her.

When Carli found out that her heartbeats were expiring, the beautiful bulldog said she could make them last for another five years if she didn't breathe too often. Sadly, she was not the first near angel to try this, and we knew it was futile and would lead to a long, slow passing.  Nigel did not want that for one of the amazing girls who rebuilt their parent's hearts when he passed. And, he knew from personal experience you could not overstay your welcome on the mortal side.

Nigel waited for when his parents were away from home, and then he appeared to his sisters as a ghost.  He could have done it with their parents there.  Humans are too far removed from the magical side of life to have recognized him, but they would have seen his sisters were up so something, causing Nigel to scurry away and Carli to suffer longer.

When Lucy saw Nigel, she knew why he was there and immediately told him that she would not be leaving with him.  She wanted more time with her parents, and she had a good reason for feeling slighted.  Although she was along in years for a boxer, she had only had five years with her parents; they adopted her as an adult.

"I should have had more time," she says.  "It took me years to find the perfect parents, thanks to you.  I didn't expect a long tenure, but five years, it went by like a blink of an eye."

Nigel told her that was true, but everything happens for a reason, and her life led her to be ready for adoption when Nigel left because only she and Carli could have healed her parent's hearts, and that is all that matters.  Also, she shouldn't look at it as just five years because she would be part of the family for eternity, but she has to pass on when her times come or be sentenced to a lonely life as a spirit.

When her parents came home, there were remnants of life while her soul celebrated at the Bride.  She was rushed to the doctor, but they could not save little Lucy's body.  Luckily, her soul had been five years earlier, and she is forever part of their family.

Hopefully, those words will comfort her parents at the saddest of times.