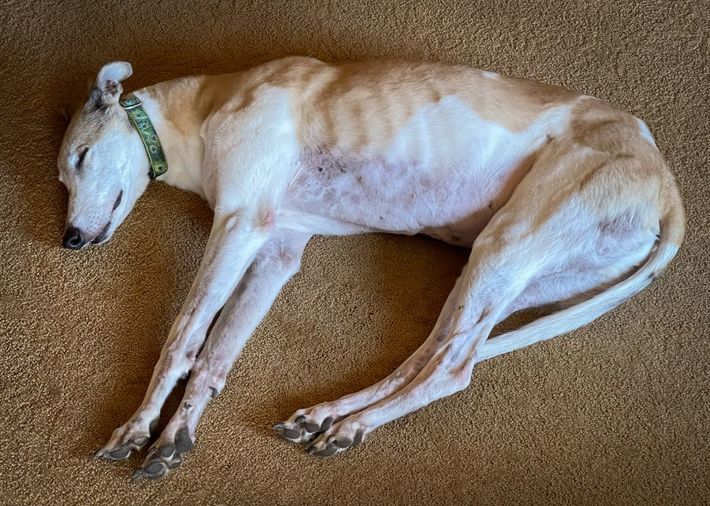 There will come a time when all souls are here at the Bridge.  The Earth and the Sun are both living creatures with set life spans  When the day comes that one of them passes, all souls will file over the Bridge, which will become the land of Happily Ever After, as everyone will be with their loved ones for eternity with no worries.

Lately, it has seemed that pets could be facing the end times before the sun, planet, and humans.  My friends have been coming over the Bridge in record numbers.  Just when I think the flow has stopped, another one passes.  Not only has this been terrible for our friends, but their parents, who only have loneliness where their heart has been.

The latest friend to take his last breath on the mortal side is my friend Cruit.  As was true with Lucy, who I wrote about previously,  Cruit was adopted, and he only had nine months with his family.  But, for Momma Rebecca and Dad Virgil, that nine months might have been nine years because they loved him with their hearts, and he returned it with every cell in his body.

When Cruit arrived in his new home, he met a sweet dog named Barney, his brother, and soon they developed an inseparable bond.  When Barney went to the Bridge, his parents were hit with a massive wave of grief, and they only survived because they had a life ring called Cruit.

When the Darkness came to bring Cruit to the Bridge, they sent the seizure monster after him.  It affected him on his favorite spot on the rug.  He stood, but his back end didn't comply, and his body began jerking back and forth, then he fell asleep, leaving his concerned parents fussing over him.

His parents took him to the vet, where he was diagnosed with Hemangiosarcoma and was internally bleeding.  It was the same reason that Barney had gone to the Bridge.  Sometimes ironies are particularly cruel.

His parents gave him the greatest gift of all and took all his pain from him and on to themselves, then let him go free, where he can return to the body of a young greyhound and run so hard he shakes the leaves from the trees.

Barney joined him, and even though they had not been siblings for long, they joyfully greeted one another.

Even though he was part of the family for less than a year, he has a forever home with Barney, and someday his parents.

His parents gave Cruit two great gifts:  One was a home to live out his last mortal days, and another was a home for eternity.  Even though he just passed, he still considers himself to be the luckiest dog in the world.

Posted by Foley Monster, Pocket and River Song at 8:50 PM