An e-mail from my rescued sister Jordan 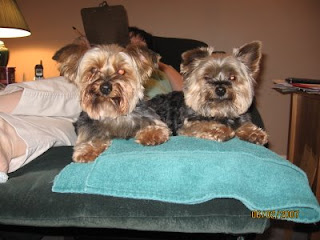 Do any of you have the 365 Puppy-a-day wall calendar? If you do, take a look at this past week, see that adorable Yorkie in the bed, yes, that’s right. It’s your Foley Monster. But who is that handsome stranger next to her? Well that is one of my most favorite sisters: Jordan.

We adopted Jordan in late 2006 from the Shih Tzu and Furbabies Rescue group. My sister Copper had just died in her sleep and my parents didn’t want another puppy. They found Jordan who was 10, and had spent most of her life living in a crate on a farm in Oklahoma and used for breeding.

She had been fostered by two wonderful women, who had to teach her how to be a pet and not a farm animal. While in her cage she had her teeth become impacted causing her severe pain, and had lost her vision. It took a long time before she could go to a simple pet owner’s home, and we were lucky enough to get her.

I didn’t know what to make of her at first. She hated being on the floor, always running to a corner trying to hide. She had to learn how to go outside, how to walk on a leash, how to be a pet. But we became very close. We both had a lot of respect for each other. But there was one thing she never learned.

She hated being alone. She used to bark, shriek; rub her paws on the door until they were bloody. I tried to calm her down but she was so worried our parents weren’t coming back. As more time passed it took us longer to calm her down once our parents did come home. We became worried she was going to do some damage to herself.

We had to give her back to the rescue. It was a very sad day. But she needed someone with her all day long. Shih Tzu and Furbabies found someone near Worcester who fostered dogs and she took her and fell in love with her and she’s still with them. Yesterday I got this e-mail from her.

Dear Foley: I would ask you how you have been but one of my sisters reads your blog to me. What a little freedom fighter you have become. I am left to wonder, was it all that time you spent listening to my stories about being caged without love that has made you the puppy warrior you are today?

I am starting to forget those times, ‘cause I’m getting old, and I think that’s a good thing. I ‘member you, and Mommy and Daddy, and I do miss you all, but I’m happier here. I don’t get left alone nearly as much, and I’m not afraid any more. I was always worried they were going to come and take me back to that place; I’m not worried about that anymore.

I ‘member mostly the heat, and being thirsty, and that horrible black water, I’ll never forget the taste of that black water. Some days I just drink and drink and drink because the water here is so clear, so cold. It is wonderful. Don’t ever take water for granted.

And the heat: that sun would beat down on me in the cage. It was like my fur was burning. And since most of the time I was with pup, I was swollen and sore, and just lay there. And then the wire in the cage would heat up. It was awful. If there is a puppy hell for bad puppies that’s it.

And I was either pregnant or nursing all the time. At first I thought of them as my babies, but after three or four pregnancies a year they just became like ticks. I couldn’t grow attached to any of them; they were just going to ripped from me anyway. And I didn’t pay attention to the boys in particular because I was afraid I would recognize them when they were grown up and were shoved into my cage when I was in heat.

My life was miserable, but I didn’t know it. I thought I was just another beast of burden, like a donkey or pig, made to suffer for mankind’s fortune. I remember those last days, the horrible pain in my mouth, everything growing fuzzy. I knew I was close to something, although I had no idea about Rainbow Bridge. I thought I would just stop.

Then all the people came, and they peeled me off that cage. My hair was so matted. I couldn’t see. They touched my mouth and I howled. I was rushed to a vet and bathed, and shaved. I swear I thought they were going to execute me. Then they wheeled me in a room and then I grew sleepy and everything stopped.

I was real groggy for I don’t know how long. I was still in a cage, then those humans, who I had learned to hate, were being nice to me, holding me, and hugging me. I smelled so much better. I didn’t’ know what was going on, and I was scared ‘cause I was leaving the only life I ever knew, but I knew it was getting better.

Then the woman came for me. She talked softly, held me gently, stroked me, I thought she was going to eat me. She brought me home, and there were other dogs there: In the house! On the furniture! With fresh water! They were groomed, combed, and bathed. They were well fed, happy and free. Obviously this woman was crazy.

Then the dogs started telling me that they lived in the house, slept in bed with the owner, that she fed them, sometimes-human food. That she would feed me, protect me, let me sit on the nice furniture, and love me. To me this was the craziest notion I ever heard, and every chance I got I tried to hide from these crazy beings, but slowly I learned, even if I hated being left alone on the floor, without a wire cage holding me in (I never knew what was coming for me.)

Then the Mommy told me I was going to be adopted because I had learned to eat out of a bowl, and drink the nice cold water, and do my business outside, and I had healed up nice from my surgeries. One day this person came and put me in the car and then I started traveling.

I saw so much of the country. It is much larger than just the flat dust of Oklahoma. There are pretty trees, and big rivers, and then when we went north these huge mountains. For a dog who never got out of a cage for nine years suddenly I was seeing more than most dogs ever get to see.

We went to a place named Rhode Island, and I was left at a lovely home with lots of Shih Tzus. I had no idea what those things were; they kind of freaked me out. I spent most of my time there on a chair, or following around the Daddy. I scampered so much on the floor the Mommy put a leash on me so she could catch me. I still had moves for a scared, old, toothless, blind lady.

Then we got to your house, and I got scared all over again, because things were strange (at least to me). Remember that first night. I pooped the bed. Oh you did not like that. But I was nervous! Your Mommy and Daddy just changed the sheets and went back to bed. I knew right then I could trust these people.

I still couldn’t be left on the floor though. I loved being on the bed or the big recliner with Mommy but the floor? Hated it. So remember how Mommy got that blue stroller out and put me in it so I could be up high when they ate, and Mommy would push me from room to room when she did chores so I wouldn’t get lonely?

I loved those days. I know Daddy was sick, then right after that Mommy got sick, and I felt very worried for them, but we went a long time without being alone, and I got comfortable with that, and then they went back to work, and I kept having those nightmares about the bad men from Oklahoma, and I was making myself sick, throwing up, and cutting my paws on the door, and panting, and not calming down even when they came home. I don’t know what came over me. And then I started making you nervous, and you wouldn’t eat. Oh my. They said it was separation anxiety, and they tried different things but I couldn’t calm down. After talking with the people who rescued me, they found another home for me, and I had to leave you, which makes me sad.

So now I’m here, and, no offense, but I do seem to fit in better. There are lots of dogs, and I have found a soul mate and we watch over each other. The other dogs here have gone through what I went through so we all understand. But I do thank you and your Mommy and Daddy for all you did. And to answer your questions, I don’t know when I will go to the bridge, but when I do, I will introduce myself to all your friends, and yes, I will watch over your Tanner Bub for you.

For those of you who would like to visit the Shih Tzu and Furbaby rescue the link is on the side of the blog
Posted by Foley Monster, Pocket and River Song at 4:00 PM