Pocket is the most powerful dog in the world

I crawled out from under the bed this morning and went downstairs where Foley was sitting on Mommy’s lap. I jumped up and Foley met me with her morning “If you even think about me moving I’m gonna nip your backside,” look. I climbed on the arm of the chair and looked at Mommy.

“Is what over little one?” she asked.

Yes sweetie,” she said kissing me on the head, “I think the great doggy cyber space war is over.”

“Well yes, but there is no administer for Doggyweb so being on it is sort of like being on a runaway bus.”

“Oh that sounds scary!” I said. 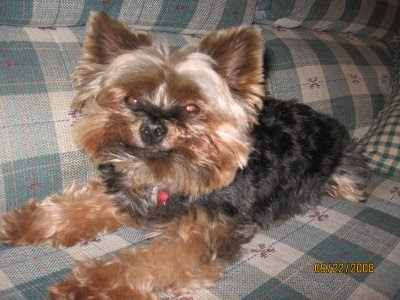 I asked her what she meant and she said that Foley had started her own private site for peaceful fun loving doggies and named it after our favorite Bub, Tanner. “And you are in charge of it?” I asked Foley. She stopped licking her pinky toes and nodded. “Then you’re like Princess!” I said, and then “yeoouch!” That’s when she bit my backside.

“Why don’t I make you two some breakfast and Foley will explain it to you,” Mommy said.

“They are blonde. And pretty. And wear too much makeup. And are self-replicating. They invaded, but they never spoke, they just looked at us, very scary. I don’t like Cylons.”

“Is there any other reason?” I asked.

She nodded her head. “Dymes,” she said.

“Oh Foley are you into the loan sharks again? You have to stop betting on the bunny races.”

“Not dimes, Dymes. You know that white doggy that showed up Friday night and ruined doggyweb for everyone. I’ve been told I shouldn’t use her name. So I call her Dymes. It’s an anagram.”

“I thought it was a Bitchin’ Freeze.”

Foley sighed. “Anyway, you know who I mean. Back when we were in the kingdom we were buds. But then Dymes got all testy with some of our friends, and more of her Daddy’s personality came out, and she got banned. I know, like us, but not like us, because we never whined and whined to get back on.

“So, when I got back from walking with Tanner I go on Doggyweb and there was Dymes. She deleted it, but her first comments were so mean, attacking Tanner, attacking our other friends. And get this: Dymes said that she is getting reinstated to the Castle. I mean come on! There is no way Judge Judy would side for her when she didn’t side with me. As soon as she saw two grown men hiding behind cardboard cut-outs of lap dogs she’d have Bird toss them out on their butts.”

“And he kept fighting with everyone,” Foley continued ignoring me. “I didn’t want Cocoa and Tanner’s Mom to see that. I was so upset, I defended Dymes before and now he was ruining everything, being hurtful and mean. So that’s when I decided to form our own space, private so no one could come in and hurt our friends again, and that’s what we have now, we’ve made the final leap home.”

“But what if Dymes sneaks on to our site like we did to the Castle?” I asked.

“Don’t worry. I have my paw right on the delete key.”

I kept my mouth shut. My butt was still sore. But I was worried. I know from having my toys stolen and having to leave the warm spot on the bed that Foley with too much power is a dangerous thing. Mommy then came in the room with our food and Foley hopped down to eat.

“Well,” Mommy said, “you know Foley is going to be watching over all the other dogs?”

“Well we all need you to watch over Foley.”

And then I realized. I was the most powerful dog in the world.