Of Pitbulls and Men

What is a pitbull? My niece Mia is an American Bulldog. She looks like this: 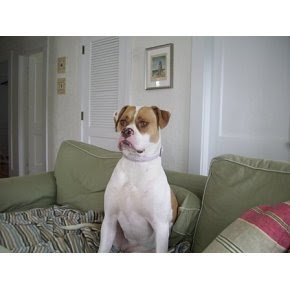 I was supposed to spend the weekend with her while Mommy and Daddy went to Wolfeboro but they got their reservation changed to a weekend in July (thank you Bear Stearns and AIG). So I won’t be staying with Mia and my brother and his wife until then.
I am looking forward to it, Pocket and I love all three of them, but when people see her picture they say “ohhh, she’s a pit bull,” like they say “ohhh, the Limbaughs just moved next door.”

They look at me and said: “That pit bull will just gobble Foley right up.” (Please excuse fowl language.)

I don’t want to be gobbled right up, and I say that Mia is not a pit bull, she’s a bulldog and she’s a good friend of mine, I never understood a single word she said but I don’t worry about her biting my behind, and I do have a mighty fine behind.

But any large, stocky terrier or bulldog is immediately identified as a pit bull, which I think is unfair. I am a Yorkie. There are several breeds similar to us, the Silky, or the Aussie, but they aren’t us (not by a long short, sorry, but let’s not kid ourselves lollipops.) When someone tells a Silky owner they own a Yorkie, and the owner corrects them, there is no disagreement. When someone tells a bulldog owner they own a pit bull and they correct them they are told they’re lying.

I don’t believe pit bulls are born as much as they are raised. I have done research using my delicate little toes to surf the net this morning and I can’t find concurring opinions on what a pitbull is. What I have determined is this: whenever a dog that is similar to a large terrier or bulldog attacks a person or pet they are a pitbull. When a dog is a regular house pet that doesn’t bother a soul, they are bulldogs or terriers.

How come bulldogs and terriers never attack anyone? When they do they graduate to the status of pitbull. If I bit one of my grandbabies in the face (oh don’t worry, I would never) would I become the world’s smallest pitbull?

Although I was born in this country I still view Americans as a proper English dog and I am fascinated by their view that if a few of a group are bad then the entire group is bad. Going back through American history: Native Americans, African-Americans, Irish, Jews, Mexicans, were all viewed as 100% bad. Now they have extended it to the animal world: sharks and pitbulls.

So now people want to ban pitbulls. They do it at Daddy’s work. No one living in a building he manages can have one. There’s this dog Ruckus. He’s a six-year-old Bull Terreir. He’s playful. When he met Daddy he jumped on him, wrapped his paws around his neck, snorted all over his shirt, left his face a wet mess. There didn’t seem to be an evil bone in his body, but Daddy told Ruckus’ Mom, who refers to the dog as her baby, that she had to give up the dog after moving in. Luckily her mother in law will take it. But Daddy hates having to split up Mom’s and dogs. It seems to go against everything he believes in.

There are other dogs that Daddy has had to help find homes for because they were called pitbulls. Even if there are papers from the AKC or veterinarians calling the pup an American bulldog or Terrier, if the bosses or police call it a pitbull the dog must go despite of the dog’s disposition.

You know what you never here? You never here about a pitbull puppy attacking someone. You know what this Yorkie thinks? He thinks that when they’re born pitbulls are as peaceful as Pocket and I. But humans see a potential in them, a potential for mayhem, and us dogs, well all we want to do is please our Mommy and Daddy, and if that means snuggling on a lap then we snuggle on a nap, and if that means attacking another dog we attack another dog. We’d jump off a bridge if it would make you happy.

You know what else I think? I think us dogs, being so loyal to you humans, and wanting to please you, are as unable to control our willingness to obey you as your cars, or your television remotes, or your guns. You train us to give you paw, and ask for paw, bam there’s the paw….can’t help it. You ask us to fetch the ball bam…we run after the ball. You train us use our forceful jaws to damage another living being…..bam.

I know you human put people in prison, even end their lives for hurting one another. I don’t think any guns or knives are locked up there. But if a human uses their dog to do damage, the dog gets locked up….or worse.

So I worry about my niece Mia. Not that she will hurt me. Her parents would never train her to do that. I am worried that she and her parents will meet prejudice some day because dogs that look like her have done some bad things, and people don’t understand them, and fear them. Because fearing and discriminating against someone out of fear, ignorance and misunderstanding has been part of this country since the Pilgrims slammed into a rock.

That’s just one little dog’s opinion. I know many of you come by for a daily chuckle, and I’m sorry, not in a chuckle mood today. Just been thinkin’ about my niece, and other dogs I think are being treated unfairly, and when that happens I just need to bark.