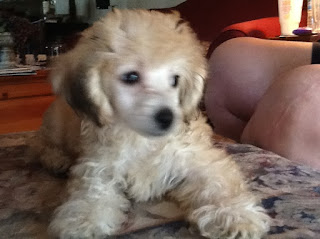 The tea parties I hold on the third Sunday of every month are getting bigger.  At first, it was just Tiara and me.  Hattie and Lily joined when they arrived. Today would be the first tea party with Pocket. I hoped she did not ruin our quiet gathering.

I packed the tea bowls, cups, finger sandwiches, and a blanket into my Galifrey satchel, specially made bigger on the inside than out. The girls arrived at noontime, and we set forth for a relaxing day by the River.

Tiara, Lily, Hattie, and I spread out a blanket, poured the tea, bit into the sandwiches, and began to relax. Pocket, who was inspecting the Riverbank, started barking. I knew she would ruin the tea party. We followed her yipping, and found her standing by an open chest. When we looked inside, we saw golden eggs.

"Pocket" I exclaimed. "Where did you find those eggs?"  She explained that she saw the round end of one sticking up from the ground.  Thinking they were tennis balls, she dug them up. "But they don't bounce," she said, pointing to a broken shell on a rock."

We inspected the eggs.  "There was a goose who laid golden eggs; maybe these belong to her," Tashi wondered.

"Anything is possible here," Lily reminded her, then asked what we were going to do.

I looked around and did not see anyone.  "Let's put the eggs in my satchel and take them to Freddy's brother's Pepsi's store.  He can tell us how much they are worth."

Of course, Pocket didn't think it was a good idea, but she was a newbie.  We seasoned angels knew better.  We shoved the eggs into my bag and began to slink away when we saw two dogs dressed like pirates in front of us.

"Excuse me," one said.  "I am Long John Hudson, and this is Captain Timmy Tunes.  We had to throw a valuable chest overboard.  We found it on the Riverbank, but it was empty. Would you dogs know anything about that?"

Pocket started to speak, but I nudged her to be quiet.  My Gallifrey satchel looked too small to hold the golden eggs. We just needed to get past these pirates, and we would be fine.

"What have you been doing?" a suspicious Long John asked.

Tiara told him we were having a tea party but were finished, and she needed to go home and open her beauty salon.  "I like tea," Captain Tunes said.  "Why don't you join us on our ship for some?"

We looked at one another uneasily, and each tried to make excuses for why we could not go, but the pirates were having none of it.  "I know Long John," Lily whispered.  "He is Hobo's uncle and a well-known angel outlaw.  They live on the sea out of the angel police's reach.  We should give them back the gold."

I wouldn't hear of it.  We worked hard to stumble upon the gold eggs, and they belonged to me.  I told my friends we should go with them.  The booty was in a secret compartment in my satchel, and they couldn't find it. Once they searched us, we would be let go.  And, I heard pirates had great scones.

We climbed aboard and soon were sitting on the deck, eating scones, and drinking tea, with a dozen pirates when one of them came forward and said they had searched our belongings and we didn't have the eggs.  I stood, thanked them for the scones, and prepared to leave when Long John noticed my pouch and asked if it was from Gallifrey.  I said no, but he pressed me where I got it, and when I couldn't produce a good lie, he snatched it from me.

He opened it, and couldn't find anything.  I told him I expected an apology when he turned it over and shook it.  The eggs fell out of the secret compartment.  "How did that get in there?" I asked unconvincingly.

The pirates forced us all into a cell below deck, without even a scone to eat.  My friends and sister were pretty angry with me.  I told them not to worry.  I had a plan.

I just had no idea what that was.

Posted by Foley Monster, Pocket and River Song at 11:16 PM