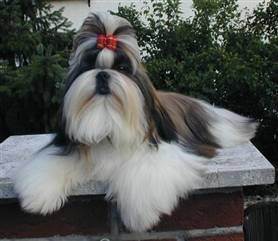 You would think that there were no disputes between angels at the Bridge, but sadly there are.  Usually, one soul will ask another for a favor, and in payment, choose a service that the requestor can do for them.  Problems occur when one of the parties does not believe the contract was upheld. That is when litigants come to me:  Judge Foley Monster.

Last month I had a tough case.  Morey, a male poodle, had a malfunction in his favorite body.  His nails kept growing.  He went to Lovey's Salon, and she agreed to do his claws until he went to Happily Ever After, and in payment, Morey would bring Lovey one fresh fish each week.    Lovey did a fantastic job with Morey's nails, but the fish was boney with very little meat on it.  Lovey was dissatisfied and filed her briefs with me.

I summoned them to my courtroom.  Lovey, a Shih Tzu, came in perfectly groomed.  Morey limped down the aisle, with his back end held up by a platform connected to wheels, which aided his mobility.  "Sorry, your honor.," he said.  "I have trouble walking since I got a bad nail job."  Immediately I smelled a rat.  It was under my judge's desk.  Bailiff Pocket scared it off.

Morey began to present his case.  He showed me his nails, and they were ragged, then swore that this was how Lovey left his nails.

Lovey was incensed and swore that Morey had done it to himself by being a nail licker.  The crowd howled in shock.  Lovey said she could prove it.  She called her witness, a rabbit named Hazel, who hopped up on the stand.

The rabbit stated that Morey comes to his field, stops, and gnaws on his nails.   He had even filmed it on his I Paw.  The evidence was irrefutable.  I ruled for Lovey and ordered Morey to pay her with fish.

I thought that would be the end of it, but Lovey came into my courtroom a week later and stated that she had never got the fish from Morey.  He was the first dog ever to refuse one of my orders.  I would have to find someone to bring him back into court.

That is when I met Bounty the Dog Hunter.  Other judges have used him to help them find pups who did not adhere to the judge's orders.  Bounty told me that he would locate Morey, bring him back, and make sure he never ignores a court order again.

Bounty said that he had never lost a subject.  He smelled the chair where Morey had sat, said he had the scent, then came back 20 minutes later with Lovey.  "You smelled the wrong chair!"  I yelled.   Bounty apologized to Lovey and told Bounty to smell the right chair.

He did and left for a week.  One day Morey returned and said that he was sorry that he had ignored the court order.  He realized it was wrong and brought Lovey a beautiful fish.  It seemed like the matter was done when Bounty arrived with a strange dog and said he had found the wanted dog.  "Morey standing right next to you," I told him.

He looked at Morey and told him he was under arrest.  I stopped Bounty and ordered him to leave my office, and I would no longer need his services.  He grumbled out the door.

I think Morey, a former street dog, will be a first-rate angel with a bit of work.

There is no hope for Bounty.

Posted by Foley Monster, Pocket and River Song at 11:27 PM