The Yorkie Leading the Yorkie 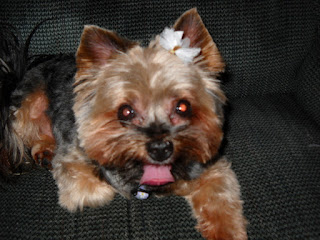 Pocket has been getting up early and going somewhere for the last couple of weeks.  When I ask her where she has been, she says just for a walk.  I didn't believe that for a second.  She was having fun without me, and I could not stand it.  I had to follow her.

I knew as soon as I got outside that I was not as prepared as Pocket. I had chosen to wear my eight-year-old body, which was comfortable but carries a few extra pounds. Pocket picked her puppy body and lengthened the distance between us, causing me to do the most dreadful activity:  Running.

Pocket came to a mud puddle with a round log over it. Because of her diminutive size, she was able to scurry across. I had to move more carefully, and when I came to a slick spot in the middle, I slid off into the mud covering my body.

I stood and tried to clean myself off, although nothing would cleanse my humiliation. I followed Pocket's path for a minute and saw her smelling a tree trunk. Were these directions to whatever fun place she was going? When she scampered forward, I walked ahead to smell the tree. It said to follow the light.  I looked up, took a few steps towards the sun, and fell down a gopher hole.

Darn the dreaded luck; I began to claw my way to the top when I felt the teeth of an angry gopher sinking into my tail. He let go long enough to call me a hole invader. I used that opportunity to pull myself out. I looked back and saw a chunk of my tail was missing.

At that point, a wise angel would have gone home, But I have always been too curious for my good. I picked up Pocket's scent and saw her burrowing under some thick brambles.  I waited for her to clear the thorns then followed.   They dug into my skin and the burrs stuck to my skin.  I got one on the bottom of my paw, which made every step painful.   I considered giving up but heard Pocket barking happily.
Now I had her.

I burst through the woods into the clearing where I expected to find her.   Instead,  a surfeit of skunks confronted me. Before I could speak, they hit me with multiple blasts of skunk spray.

I gave up and began to walk home covered in mud, thorns, burrs, and skunk spray. I.was limping, missing part of my tail, and unrecognizable. Those who did notice me provided a wide berth. They were less able to tolerate my odor than I was.

I arrived home to find Pocket blithely sitting on the picnic table licking her paw. I asked where she had been. "You should know," she said sagely. "You have been following me."

I tried to feign ignorance. "The truth is written all over your face," she said," or at least your fur. You fell in the mud chasing me over a log, fell into a gopher hole trying to sniff my tree, got the cuts from the brambles I climbed under, and my skunk friends sprayed you."

"How did you know?" I asked anxiously.

"Because I led you there," she said.  "I wanted to teach you a lesson about sticking your nose where it doesn't belong.  How did it go?"

I was furious and vowed my revenge, but deep down, I was proud of her.

I had taught her well.

Posted by Foley Monster, Pocket and River Song at 10:07 PM