The Doppleganger Part One 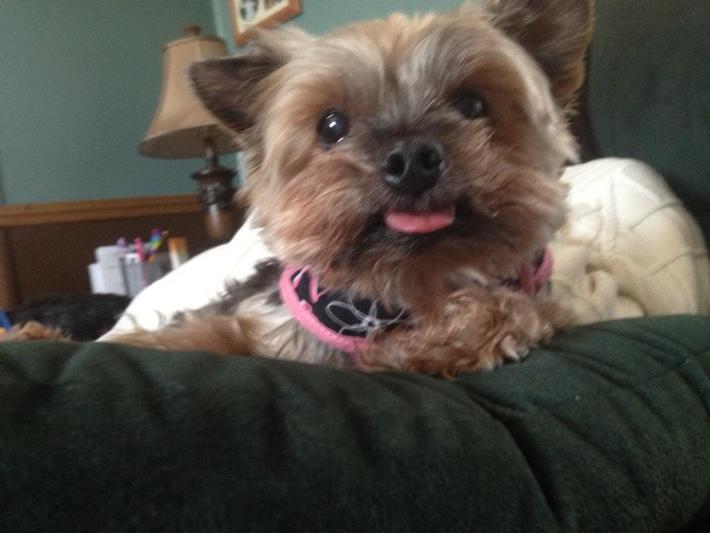 I was enjoying my morning walk when I became aware of someone following me.  Every time I turned back, there was no one there.  Finally, I ducked down an alley, then stepped back out to catch my follower red pawed.  I was shocked to see, except for being dirty, the dog looked like me.

I asked her why she was following me when someone put a bag over my head and threw me on the rear end of a horse.  When the bag was removed, I was in a barn; the fiends quickly put a collar on my neck and chained me to a wall.  I demanded to know why this was happening.

My Dopplengar introduced herself as Riley.  Despite being one of the prettiest Yorkies in existence, she never had a home on the mortal side, and even at the Bridge, lived on the street.  Riley thought it was her destiny to be alone when she read Doggyspace Daily and saw my picture.  That is when she began to formulate her evil plan.

Because of circumstances beyond her control, she believed she had been denied the life she should have led.   When she saw me, she became jealous, which triggered her dark side as it often does.  She worked every day on her body, molding it until it looked like mine, then began to hunt me.  When she finished, Reilly began to search for me, and on this day, she was successful.

I was in the barn where she had slept most nights.  The owner, Beevis, had been a former minion who a fellow judge decided had been cured of his worst tendencies, a decision I immediately regretted. He was the one who had bagged me, and now I would be a barn dog, keeping it free of critters, while Riley went to Doggyspace to take over my role as judge and free more unworthy minions.  Her interference could tip the scales between Good and Evil at the Bridge and send it and the world into darkness.

They left to start their nefarious scheme, but I was not worried.  They had picked the wrong dog to pupnap.   My friends would immediately know that Riley was an imposter.  I was far too witty, wise, and urbanite for a mere barn dog to impersonate.

After two days of being trapped in the old, wet structure, I began to worry my friends were not as bright as I thought. If help were not coming for me, I would have to find a way to escape.  The only souls visiting me were the vermin they had tasked me with chasing from the barn.  I would have to befriend them so that they could free me.  But they had been chased away by Reilly so many times they didn't trust me.

A bunny named Quick had poked its nose in the barn twice.  It was too scary to enter.  I told him I could send him to a place where carrots grow bigger than tree trunks, and all he had to do was free me.  The others told him it was a mistake, but Quick could tell I wasn't a bunny hunter.  A bunny chaser, sure, but who isn't?  Quick came in the barn, then chewed through my collar.  Soon I was free and Quick, and I started to search for my home and the tree trunk carrots.

Posted by Foley Monster, Pocket and River Song at 11:22 PM