Tango and the Great Pumpkin by Pocket Dog

I Pocket Dog am taking over the reporting duties from my sister, Foley, who is judging a pumpkin contest at Doggyspace on the Bridge, where we like to keep our weather concurrent with the seasons our parents are experiencing.  It is autumn for many of us, which means cooler weather, shorter days, and an obsession with pumpkins, all capped with the gourd growing contest.

The morning of the competition, I was surprised to see a frantic Tango knocking on my door. I had been inspecting the pumpkin gardens and knew that Tango had, by far, the best crop.   But now, it was apparent something was wrong.

I asked Tango what was wrong. He said that someone had stolen his prized pumpkin from the patch.  He had come to Foley for help, but any interference from the judge could cause Tango to be disqualified from the contest.  This was a job for Pocket, Girl Detective.

I brought Tango into my office and asked her when was the last time he saw the missing pumpkin.

"Last night, I went to check on it, and it was still growing in the garden."

Tango looked at me curiously. "It's big, round, and orange."  I wrote that down.  "Wouldn't it be better if we were looking for it instead of asking questions?"

"According to the big book of detective tactics, I can find out more through questions than searching," I explained.  "Did it have any reasons to leave?  Was it an unhappy pumpkin?"  I asked.

"It was a great pumpkin," Tango said. "Are you sure Foley isn't here?" Tango asked, looking around the house.

"She's busy ironing her robe," I said, then stood.  "I think we will begin looking in donut shops."

"Yes, I am afraid your pumpkin may have become an ingredient for spice latte,"  I told the trembling Tango.  "If so, we might be able to save some of it."

We hurried out of the house and went to Bisket's biscuit shop.  Our friend was brewing a spiced latte as we entered.  In my big book of detective tactics, it said to confront a subject immediately.  I accused Bisket of stealing Tango's pumpkin and, offended here, threw a pot of coffee at me.  When I realized it was French Vanilla, I moved on.

We checked more donut shops, a tad less aggressively, but still did not locate the great gourd.  When we left the last establishment, I saw a flyer on the lamppost for the Grand Pumpkin Ball.   It would be starting in a half-hour.  I told Tango we were going there, and if my hunch were correct, we would find his pumpkin.

We waited by the entrance as dogs passed us in their Halloween best.  A group was looking down the street and began to ooh and ah.  Then a Tango's great pumpkin, on wheels, stopped, and Lily climbed out with Hattie.  "Hey, that's my prize pumpkin!" Tango exclaimed, running towards it.

"I found it in a patch," Hattie said.  "I didn't know it belonged to anyone."

"I was supposed to enter it into the fair today.  Now that it is a carriage, I can't."

Lily touched his paw and told him she was sorry, but how would he lie going to go the ball with two of the most beautiful dogs at the Bridge?  It was an offer he could not refuse.  He took Hattie and Lilly by the legs and happily walked into the dance.

I think Tango had a much better time than he would have at the pumpkin contest.

And Pocket Dog Girl Detective had solved another case. 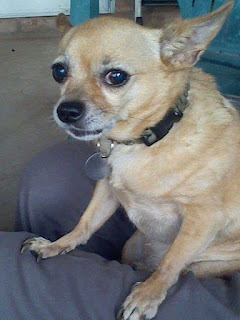 Posted by Foley Monster, Pocket and River Song at 11:38 PM