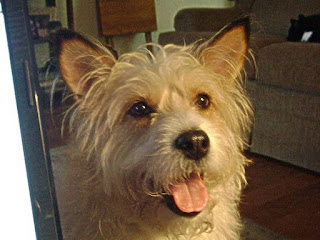 When my doppelganger appeared and chained me in a barn, I thought Riley had done it just to replace me.  I did not know she was a group of denizens from the dark side who intended to take over the Bridge  A rabbit named Quick freed me, but my family and the other angels believed Riley was me.  When they turned on us, we took refuge in the river where we needed to formulate a plan to stop the villains.

Pocket, who knew I was the real Foley, and for that reason, was hunted by Riley's minions, lay on the riverbank, wet and cold.  "What are we going to do?" she cried.

Riley may look like me, but she had none of my memories.  If we contacted our friends and I proved to them, I was the actual Foley by stating facts about our relationship that only I would know, we could form an army to prove Riley was a fraud and send her back to the barn where she belonged.

The first dog we saw was Aran.  She began to bark when we appeared, thinking we were the evil angels.  I told her her Secret Paw when she went to the Bridge and sent her mom a picture book of sweet Aran.  She realized only the real Foley would have remembered that and apologized for not believing me.  I told her not to worry, everyone did, but she could help us change that.

Next, we traveled to the most well-respected angel at the Bridge, Tommy Tunes.  I began to explain that despite what he may have heard, I was Foley Monster when he laughed and said he knew that because of my eyes.  Tommy has always been on top of everything. With Tommy on our side, the chances of defeating the imposter grew exponentially.

From there, we convinced Paco, who is one of my friends, and with whom I share hundreds of secrets, and Winston, the newest angel, who knew how I helped him become an angel.   We heard a commotion occurring at the town square and saw an Angel Foley appreciation party happening.  There was a big bowl of Kool-Aid near her, and she was passing out cups filled with it.  "I know whatever is in there will help the dark angels take over," I said.  "It is going to take someone that all the angels love to stop them."  I meant myself, but Tommy stepped up and told the angels not to drink.  Everyone stopped.

He told them to empty the cups and that Riley was an impersonator.  They began to do so when I stepped up, and they stopped.  "Get her!" Riley ordered.

"Why should we trust you," one of the angels asked.

I tried to come up with a reason, but the crowd was turning on me.  Suddenly Pocket was next to me.  "I understand," she said.  "I know Foley stretches the truth, but I don't, and you can, believe me, this is my sister Foley." She held my paw in the air.  Aran and Paco swore she was telling the truth.  The crowd turned on Riley.

She tried to run but was caught by Sheriff Benjamin and would have been sent to minion court, but I said she was just misunderstood sent her to training classes.  We let Beevis become a minion.  Then the party turned into an appreciation for all of us who stopped the evil angels.

When I returned home, I had one more angel to confront.  I approached Jax and asked him how he could have mistaken another dog her me.  "Oh, I knew it wasn't you; I just liked her more."

If I weren't so grateful and tired, I would have butt bit him.