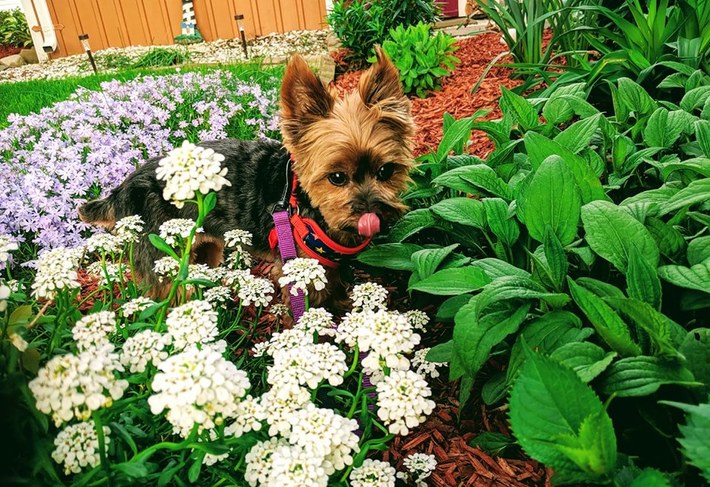 Thank to a rabbit named Quick, I escaped the barn where my doppelganger and her lackey Daddy Beevis had chained me.  I had to get back to Doggyspace and reclaim my life.

We found the road back to my house.  On the way, I promised Quick he could live in my yard, where there is yummy vegetation to chomp.  When we finally reached my home, I heard raucous laughter.  I looked in the window and saw my family sitting down for dinner, and at the head of the table, I was regaling them with what I thought was a mundane story.

I burst into the house and said, "That Foley is an imposter, I am the real one."

"There she is," the Faux Foley yelled, pointing at me, "my double who is trying to take over my life!"

Riley was clever.  She was doing the old fake double switch.  Thankfully for me, my family would, upon seeing me, know who the real Foley was.  Jax hoped down to greet me, or so I thought, instead he yelled "imposter!' and, along with my siblings, chased me out of my yard.

It surprised me when Pocket was the most determined chaser.  I had been on my paws all day and was tired.   Plus, the body I was wearing had a few extra pounds.  After ten minutes, she bit my tail to stop me.  I fell to the ground with my sister over me.  "Please!" I begged.  "I am the real Foley."

"I know that," Pocket said.  I inquired how.  "The other Foley was kind, funny, brave, intelligent.  I think our siblings, who have hoped for years that you would change from being mean, cowardly, and a dope thought that the powers that be answered their prayers, but I knew better.  You would never go changing just to please us."

I wanted to give her rap in the mouth, but she and Quick were my only chance.  If my family couldn't tell Riley was an imposter, then my co-workers surely would.  I learned there was going to be a swearing-in ceremony and hurried to Hobo's Landing.  I saw a new angel approaching and waited anxiously to see Riley make a mess of the commemoration, and then I would step forward and declare, to great cheering, that the real Foley Monster was here.  I could imagine the celebration.

I watched with joy as Reilly stopped the proceedings by giving a speech about life at the Bridge.  What a mistake!  Angels wanted to be sworn in immediately and then see their friends, not listen to some long-winded, maudlin speech.  When Reilly finished, everyone was crying, along with Quick and Pocket. I had to put a stop to this, but Pocket bit my tail and stopped me.  "Listen!" she said.

Jax appeared, carrying a poster board.  On it was pictures of me, Pocket and Quick.  Reilly announced that we were wanted imposters who were trying to take over the Bridge. She warned that we would be hard to find, but she had a foolproof way of locating us.  Jax produced the comforter from our bed.  He lay it before a pack of hound dogs who sniffed it.  Then the biggest one turned towards us and pointed.  The angels turned to us, and one shouted:  "There they are."

We ran off and jumped in the river, and luckily the hounds didn't follow.  We climbed out a mile downstream.  Pocket asked me what my plan was.  I wish I knew.
To be continued

Posted by Foley Monster, Pocket and River Song at 11:26 PM