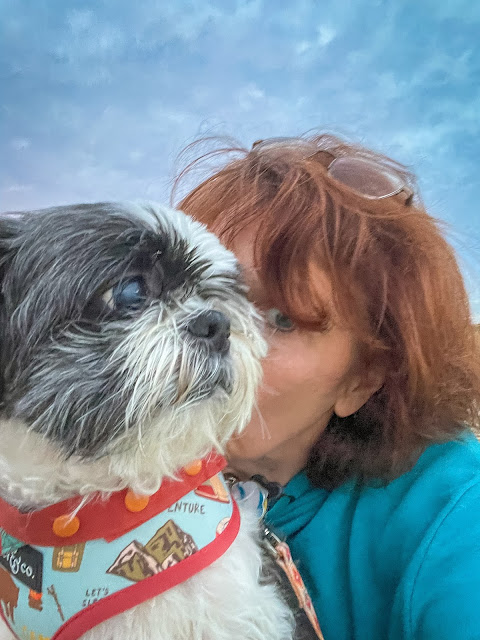 Arty traveled with his parents and sister Rosy on the mortal side. This week he made his final trip but had to make it alone.

Arty was one of our first and best, Blogville friends.  He is a darling black and white Shih Tzu who looked enough like my sister Blake to give me the warm fuzzies whenever I saw his smiling face.

Arty, Rosy, and his parents piled into their RV and visited the most beautiful areas of the western United States, and they shared their adventures with us daily on their blog.  It was like having the extraordinary privilege of traveling with them.

Before his traveling days, Arty served as Mayor of Blogville, making wise decisions and creating a place for dogs and their imaginations to thrive. Arty's election proved what a loved dog he is by those lucky enough to know him.

But most of all, Arty was a beloved family member who could spread joy with just a look.  His parents were wise enough to know you never take a smile for granted because they are all unique, and when they are gone, they won't shine on the mortal said again.

Arty's arrival was stunning, not just because it was unexpected but because of the manner used. Arty crossed the Bridge on the back of a white Mustang, firing his pistols in the air to announce his appearance.

Running to greet her brother was Dory, who preceded him at the Bridge. Arty slipped off his horse with more grace than any dog I have seen, and they hugged the stuffing out of one another.

Then came his Blogville friends, who welcomed Arty with hugs, tears, laughter, and kindness traits he had showered on them for ten years.

Having been a mayor, he was experienced in the swearing-in process, which occurred smoothly. When I was given a chance to speak with him at the colossal welcoming feast, he told me he had a message for his mom.

When a dog squirts a pee mail, they leave a bit of themselves behind, so wherever his parents go where he has peed, he will be there with them. The same goes for their yard and that spot in the RV that; his parents never noticed, which he left so he could always go with them.

I had one more duty before the evening ended. I swore in Arty as Mayor of "Blogville at the Bridge" for as long as he wants to serve.  All the residents are excited about the beautiful events he will bring to their village, just as he had to the mortal side of Blogville.

Arty's arrival is a significant addition to the Angel side. Unfortunately, it came at a terrible cost for the mortal side.

Posted by Foley Monster, Pocket and River Song at 9:10 PM