The Most Relunctant Angel 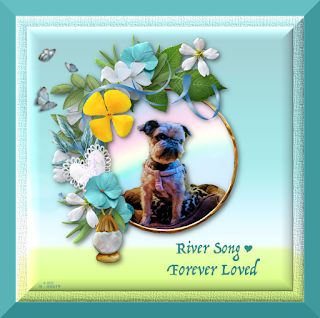 If there is one thing we know about River Song it is that she won’t come. She looks at you, spins around, hunches her shoulders and does everything but come to you. So it was no surprise that, on her Bridge Day she would not come,

She is hopelessly devoted to you that she wanted to exist fully as a ghost to stay by your side and refused to cross the Bridge. I had to howl to her that if she chose to be a ghost and not as powerful angel ir would be selfish.. She looked at me, spun around, hunched her shoulders and stayed in the In Between.

Pocket joined me and yelled to River who she was which unfortunately I did not see as an incentive. I explained to River that she could spend as much time as she wanted as an Angel ghosting her mom, and would help bring good things to you.”I was the only good thing she needed,”

River said,”and you powerful angels couldn’t keep me with her,” she said. I had no answer. Our failure to save River made us no different than the cops who stood outside Uvdale helpless, hopeless, and inefficient. Maybe I would leave the Bridge and join her as a ghost for all the good we do.

Then Pocket stepped up and yipped, in her super annoying high voice “you need to join us because there is a war ongoing between those, like Foley and I who want to bring happiness to the world and the others who want to destroy the world through sorrow. We fight this war everyday. Some days we lose, as the Bringers of Sorrow take beautiful souls like you, or at Uvdale, or Buffalo, or the Ukraine, or just for living in their skin. The Bringers of Sorrow have learned how to camouflage themselves in the light, to make good souls believe they are like minded and follow them into destruction. Never have they been closer to taking control of the world, where there will be no joy, or peace. Everyday we see it grow darker, and we fight harder, but we need more angels like you to fight so the Bringers of Sorrow do not win. They would separate our parents, take their money, their home all in the name of the Twisted God they are following. We can’t let that happen. So we fight. I don’t know if we will win, or there is a point, there probably isn’t but if we can save just one dog and keep their Momma from experiencing the constant sorrow that is plaguing ours isn’t it worth the struggle!

With those words River stood and crossed the Bridge finally shedding all the pain and illness that the Bringers of Sorrow had inflicted on her. Knowing that no dog had more passion for her people I immediately gave her a command causing hundreds of angels to sign up

To fight under General River Song.

The Bringers of Sorrow have no idea what we have in store for them. The mightiest angel has arrived.