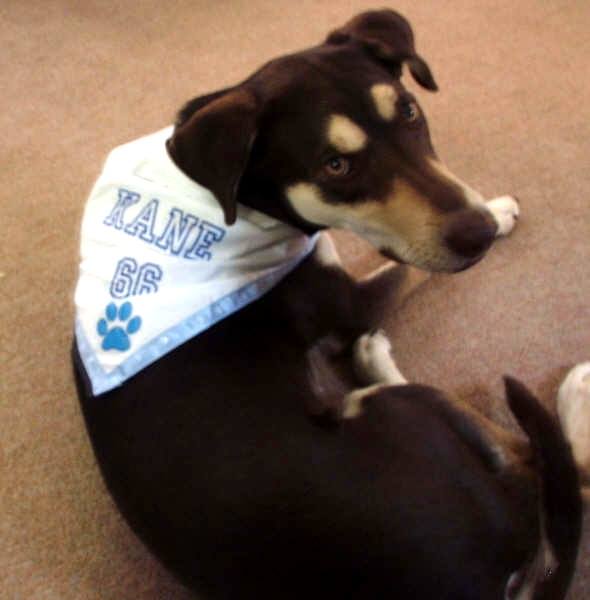 I am not sure how to define what a dog's dog is, but I know that Kane is one.

Funny, sweet, lovable, wise, and loyal:  Find an adjective used to describe a  great pup, and it will fit Kane perfectly.   He lived his mortal life on a big farm running freely,  chasing away critters, protecting his property, doing chores, and laughing all the way.  We housebound dogs could only dream of living such a life and did so vicariously through Kane.

A huge crowd gathered at Hobo's Landing when word spread that Kane's arrival was imminent.   We know all dogs have a limited amount of heartbeats, but it seemed like Kane would live forever.

It is impossible to think of his dad's farm without Kane.  I know he is committed to visiting his dad every night in his dreams to give him the guidance Kane has provided since he was a pup to help make the farm successful. His sister  Daisy preceded him to the immortal world and had immediately started her farm where she grew crops and sold them at the Doggyspace Green's weekly farmers' market.

She was standing next to me when I swore Kane in as an angel.  Kane's  friends wanted to give him a vast, welcoming party, but Daisy would hear none of it.  She took him by the paw and told him they had work to do.  His friends were disappointed that they wouldn't give Kane the celebration he deserved, but they knew a farmer's job never ends.

Kane went to work tilling the fields, picking the crops, and patrolling for any vermin who might sneak onto their property looking to forage some free food.   Daisy didn't give him time to stop and think. The list of chores she had for him was endless.

Finally, Kane stopped and asked his sister why she was so adamant about them working so hard.  Daisy told him that she had started on the farm as soon as she reached the Bridge.   We are farmers, and we don't have time for parties or rest," Daisy insisted.

"Dad always found the time for our dog friends," Kane gently observed.  "We can't stay on the farm and do nothing but work."  Daisy disagreed and was adamant that there was too much to do. When Kane continued to persist, Daisy admitted what drove her to work so hard.

" If I stop, then I start thinking of all we lost," she said pitifully.  We had such a wonderful life.  I get sad when I think about it, so I work so I don't have to remember."

It is usually the first sibling to come to the Bridge, who is the most knowledgeable, but Kane's many attributes were wisdom.  He told his sister that she had to go through the pain because it was the excellent memories beyond it.   He finally convinced his sister to stop so they could mourn together.   Then brother and sister day came together and had a good cry.  Daisy said she felt better.

For the first time since she went to the Bridge, Daisy went to the town square where Kane was given his proper welcome home ceremony.  Watching him with his sister made me realize why he was a perfect dog.  Even at his lowest point after crossing the Bridge, he was still thinking of others.

I hope his father takes comfort in how loved and appreciated Kane is on both sides of the Bridge.

Until the day comes in the long-distance future that his father joins him, Daisy and Kane will rill the farm for him, but this time they'll remember to stop and enjoy life and remember the good times.