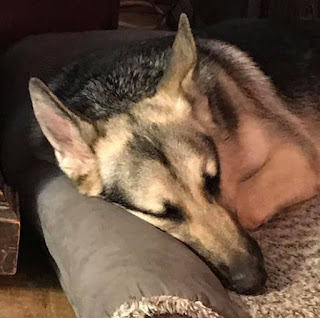 In the beginning, there was Baron.

When we started on social media, he was a leader.  The beautiful German Shepard, also known as Bear, was one of the pups who taught us about dog social networking.  He was so popular that he had his celebration: Baronfest, where people and dogs came across the country to honor him.

Sadly, he was also one of the first of our friends to go to the Bridge.  Before that, passing over was something we feared, but Baron visited us in our dreams to show the magical place that is Rainbow Bridge and let us know that life is everlasting.

Knowing he was getting older, Baron began searching for a new dog for his mom to be alone when he passed. He interviewed puppies in his dreams and found Cheyenne, who he believed would be her own dog and not a sad reminder of him. He signaled to his mom that Cheyenne was his choice by leaving two four-leaf clovers on the grass when she picked Chey up.  Baron did not have long with Chey, but he taught her everything she needed to know.

She proved to be a perfect choice.  She made new memories for her mom without stirring old ones.  She became a fantastic big sister to Kaiser, who went to the Bridge too early, and later Griff.  Most of all, she helped rebuild her mom’s heart, something she thought impossible when she rescued Chey.

Dogs of my generation were part of the first wave of social networking.   Many of them, like me, have gone to the Bridge, and been replaced.  Broken hearts were mended, and smiles continued.  But now, that second wave, the rebuilders, like Chey, is coming to the Bridge, shaking the new ground that was carefully rebuilt.

The lions who come at night and left the seeds to rip apart parent and dog moved quickly when selecting Chey as their next target.  Suddenly, after a healthy 11 and a half years, she began bleeding in her GItractk.  She got a blood transfusion, and we angels were overwhelmed by all the prayers for her.  We quickly flew down to Chey, intent on saving her.

Sadly, upon arriving, we learned the unbearable truth. The lions had destroyed Chey’s liver, and there was no doctor, or medication, that could reverse what they had done.  Shortly after we did, the doctors learned of her condition, and then Momma Monica, who knew she would have to remove the part of her heart that belonged to Chey and give it to her before letting her go to the Bridge.

Baron is an important Angel and has been given special privileges, so instead of waiting for Chey to cross the Bridge, he got to meet her soul as soon as her heartbeat it’s last and guide her over the Bridge to where her many friends and family awaited.

Before I swore Chey in, in front of everyone, Baron thanked Chey for taking such fantastic care of their mom and making him proud. Then they hugged, and their tears were mixed with human ones that fell on us while we waited.

Then Chey and Kaizer, who went to the Bridge, far too young, were reunited.  They hugged too and then played like they did when they were young.  Brody, forever the alpha dog, gathered his siblings together to plan how to rebuild their mom’s shattered heart once again.

And, they will help her find the next pup, who will usher in a third wave of social media pups to lead us to a brighter future.

Posted by Foley Monster, Pocket and River Song at 10:41 PM