Who Needs Branson and Bezo When You Have River and Pocket? 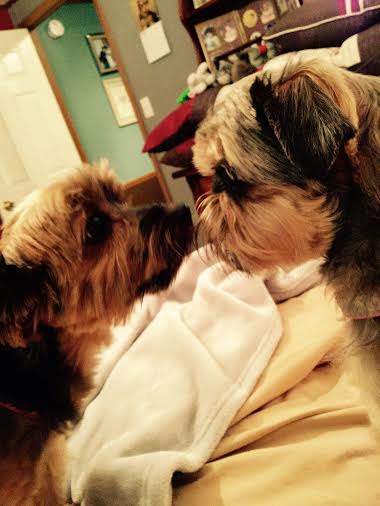 I, Foley, often report to my mom about my sisters' activities.  This is one of those reports:

If only you were aware of what occurs when you are away.

On Saturday, as soon as your car left the driveway, River opened Pocket’s crate and told her she needed assistance.

Pocket groaned. Having lived the first half of her life with me, she knew that she was only needed for bad things. She told River she was too old for adventures and, after nearly 14 years, had earned the right to rest.

River said that she got into a Twitter war with Richard Branson and Jeff Bezos to go deeper into space. “As a fellow billionaire, I must meet their challenge.”

Pocket reminded River she was not a billionaire.

“I have eaten a billion kibbles.  And they are stored in my belly. I can regurgitate them when needed.  It’s a new currency I created with another billionaire friend Elon Musk:  puke coin.”

Pocket considered River quite insane and doubted she had a rocket. Still, she balked at going until River told her you were bringing home chicken and she would give Pocket her share. Puke coin billionaires are crafty. Pocket knew it was a lie, but she could not pass up chicken and agreed to go.

River removed the top of the air conditioner vent and slid down, followed by Pocket. Once there, Pocket saw the rocket ship. “How did you get it down here?” An impressed Pocket asked.

“We are going into space in a rocket built by a cat?”  Pocket exclaimed.

“Why not?  Alan Shepherd went up in a rocket built by a Nazi. We are all comrades in space. “

River got in the pilot's seat and Pocket the one behind it. She didn’t think they would ever get off the ground, but when River started the engine, the rocket jumped through the slats, cleared the neighbor’s roof, and jetted into the sky.

The G forces pushed them back in their seats. River held an altimeter in her hand. When they reached the heights, Branson had River turned to Pocket and said she was leaving her mark.   They were at zero gravity, so River tied her leash to her seat, opened the top of the cockpit, floated into space, and peed, marking this height as hers.  Impressively, she had written her name.

Satisfied with her achievement River got back inside just as the rocket tipped and sped back into the atmosphere.  Something buzzed by the window, and Pocket saw a modified fighter jet built for high altitude.  “It’s the space force!” River yelped.  “There must be a UFO around here.”

“Well, they aren’t taking me down without a fight,” River vowed.   She reached over and pulled out a gun.

“You can’t fire on the space force!” Pocket cried, but Griffons weren’t built on listening.

“No, it’s cat poop surrounded by litter.”  The space force had thought of every contingency in building their space war machine, except one—windshield wipers.  Ugly Joan’s poop hit the glass, blinding the pilots as my sisters’ ship fell from the sky.

First, my sisters celebrated, but then they realized they were free falling.  “Don’t you have a way to stop it?” Pocket asked.

“We never thought about landing, only rising,” River said.  “It’s okay,” she tried to calm Pocket.  “We’ll be fine.  All I have to do is aim for the birdbath.”

Pocket braced for impact.  The rocket hit the fern trees by the birdbath and got caught in the branches.  My sister climbed out, and Pocket swore she would never leave the ground again.

They got in the house, and River began to make plans to get the rocket back under the house when they heard it refire.  My sisters ran to the window to see three squirrels in the cockpit disappearing into the blue sky.

Now, thanks to River, we have space squirrels, creatures too hideous to consider.

But, until the space squirrels attack, River is satisfied that on this day, she went faster, higher, and longer than any Griffon ever!