For Dodger: May You Never Stop Running 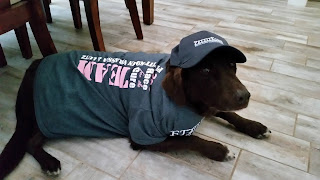 Dogs are always better in packs, and there was no more extraordinary group than the Labbies.

When I first met them, they were composed of Logan, Reba, and Dodger.    When Reba went to the Bridge, she found Raja to take her place in her mom’s heart.  Six years ago, Logan passed over after suffering heatstroke.  Named after a dear friend who had recently passed to the immortal world, Brody joined the pack to keep it a trio. But, the years began to take their toll on Raja and Dodger.  The latter begged for, borrowed, and stole heartbeats to stay with his mom, and he still had plenty in reserve, but the rest of his body was failing him.  This week Momma Wendy made the hardest decision to end his suffering and send him to the Bridge.

Fourteen years ago, Momma Wendy saw a Craiglist ad placed by a couple who couldn’t handle their lab’s wild side. When she answered it and met Dodger, she could tell he would be a handful. But, the Lord had given her two hands and a love for all animals. She had worked with horses for years and knew how to calm animals through love, understanding, a stiff backbone.   She happily brought him home, and when she let him play in a field, she realized that Dodger was the fastest thing she had ever seen.  A baseball fan, Wendy’s son, named him Dodger because he was a born centerfielder.  Big sister Reba taught him to return the ball after making one of his spectacular over-the-shoulder catches and not keep running.

Dodger bravely fought through several issues last year, namely hips that had long stopped working. Combined with seizures and a mini-stroke, the lions were determined to separate Dodger from his mom.   They also took his hearing and plagued him with dementia.   He cried whenever his mom left the room, forgetting where she was.   Momma Wendy knew her baby’s quality of life was diminished and, although it broke her heart, she sent him to the Bridge, reuniting the original trio.

Despite his size, Dodger was his mom’s snuggle baby.   She merely had to say the word “snuggle,” and he would run to her and place his head on her lap.  When they both became aware, the end was near; they cuddle a lot, enjoying the heat and comfort of one another’s familiar bodies and scents.   They made the most of his final 15 months, riding out Covid together. As horrible as the pandemic was, it had secret benefits. For Momma Wendy and Dodger, it was the chance for a long goodbye.   She was a terrific dog parent, and he was a great dog, but together they were spectacular, reaching heights they never would without one another.  When they said their last goodbyes and Momma Wendy told him what a good boy he had been, he wished he could verbalize what a great mom she was and how much he loved her.  He needn’t worry because he said it all with his eyes.

A mortal life begins with joy and ends in tears.   The opposite is true of the immortal world:  Life starts in tears and ends in joy.  When he reached the Bridge, Dodger was reunited with Logan and Reba: The original labbies were back together.  I barely had a minute to swear Dodger in when his siblings pounced on the new arrival. They sang and danced together and gave chase to one another for hours.  His mom was right:  Dodger was the fastest dog ever. Even in joy, there was sorrow because they knew their mom was brokenhearted.  Her new angels are working very hard to make sure there will be more dogs, horses, challenges, and love in her life.   But, it will never be as memorable as it was with Dodger.

I think that’s true of every angel who was ever whole-heartedly loved.