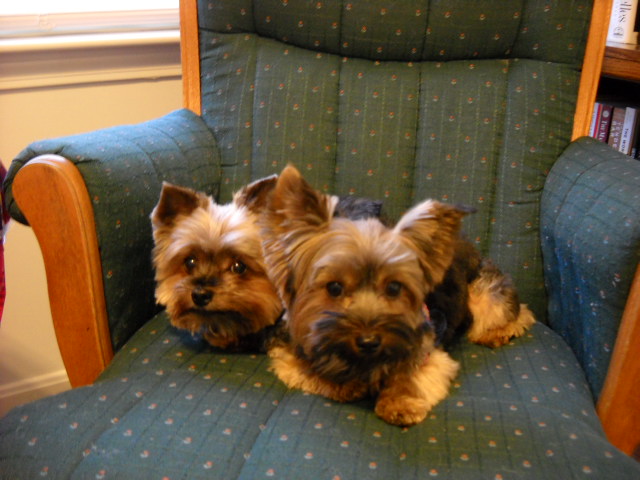 I knew Pocket wasn’t feeling well earlier this wek, so I decided to fly down as a ghost to see her and reminisce about some of the great adventures we had together.  “Remember when we went to New York?” I asked. She groaned and said she would rather forget.  I knew she had lost her sense of daring-do, and I would have to restore it.

She was just a puppy, four months old when I learned that if I went on the computer, typed in a zip code, highlighted it, then clicked it, I would upload to where the zip code was from. When everyone was working, I took Pocket from her crate, held her paw, and uploaded us to New York City.

Pocket and I landed in the lobby of the Empire State building. “We are going to go to the top!” I said excitedly. “I bet we could see our house from there. Pocket balked saying she was scared. “It’s perfectly safe,” I told her, “unless you put your paws on the glass. Then you will fall to a terrible death.  Now follow me.”

I snuck through a door that was jammed open.  The only thing that was between us and summitting the building was a few stairs.  When I told Pocket we just had to climb a bit, she said: “Are you crazy?”  I told her it would only be a few floors.  After 87,000 steps, Pocket laid down and told me to get her after I reached the top. I was beginning to regret bringing her.  She was a drag.

I went to the top, looked at my people, took a picture of our house, then went back down only to discover, Pocket was gone.  I checked the stairs and floors.  I shouted her name, but she didn’t answer.  I had to find her.  I couldn’t go home alone.  Pocket hadn’t been around long enough to worm her way into my parents’ hearts, but she did cost money, and that would be missed.

I ran around the streets asking if anyone had seen a two-pound Yorkie pup, but they all pretended they did not understand my barks.  I remembered I had a superior sniffer and that Pocket smelled faintly like pee.  Sadly, so did the entire city.  Then I heard a familiar yip and ran down an alley pursuing the sound.

I saw Pocket with a group of stray bulldogs.  I caught up to them and confronted the leader, telling him I wanted my sister back.  “Forget it, lady,” he said. “Pocket is with us now.  She’s still got all her lady parts and is young and fertile.  She can raise a gang of her own.”

“I am going to be a stud!” simple Pocket boasted.  I explained to my sister that our parents would miss her, but I had told her that they didn’t need another dog for so long she started to believe it.  “I am better off here,” she said.  “You are right, I can’t be housebroken, and I don’t listen.  Mommy and Daddy won’t miss me.”

I reminded her of the soft touches she would get at home, the big bed, the unconditional love.  “But I won’t be getting dumpster chicken,” she said before spitting up something gross.

I asked her what she wanted to come back home, and she said the ability to pee wherever she wanted, me to treat her with respect,  and the space in the bed by my parents’ knees, which is the warmest.  I offered her two out of three, and she agreed.

But, we still had a problem.  The street dog would only let her go if I fought for her.  I knew it would be challenging, but I was tough and a great knee biter.  We charged at one another, then he bit me and tossed on to the top of the Statue of Liberty.

Then I saw Pocket lunge at the big dog and push him back, ordering him to leave her sister alone.  She showed such ferocity the gang ran away.  We reunited at Lady Liberty’s big toe.  We snuck into the office and uploaded us home, getting there just before the humans did.

When I got done with my story, I could tell Pocket felt better and got some of her grit back.  I want her to be happy, healthy, and wise but will settle for two out of three.  I do not want my sister to come to the Bridge anytime soon.  When she does, I know she’ll never leave.  I swear she will be here for an eternity.

Posted by Foley Monster, Pocket and River Song at 8:36 PM