Foley, River and Pocket Attempt to Blow Up all the Fireworks 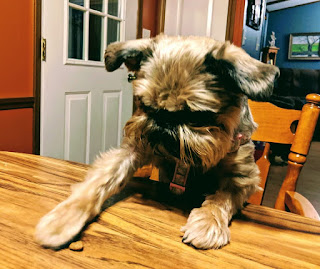 For all dogs, but especially those sons and daughters of Yorkshire, England, the Fourth of July is the worst night of the year. I know humans complain that we dogs make noise, but no creature on Earth raises an annoying cacophony than an American celebrating its independence. While we can adjust to the fireworks sponsored by local municipalities, which are usually short, it is the illegal backyard displays that last all night and seem to be occurring on every block that frightens us and can disrupt the digestion of our precious bodily fluids.

I hoped to take legal measures to stop this terrible practice during the past year, but battling COVID and the election dominated lawmakers’ schedules last year.

I vow to redouble my efforts to end the practice in 2022.

But, that did not solve the most pressing problem:  To wit - stopping backyard fireworks this year so dogs can have a peaceful night. For that, I had to rely on my sister's Pocket and River Song and the secret codes I procured that allow dogs to upload themselves anywhere in the world by typing in a URL, then sitting on the mouse.

I gave Pocket the codes because River simply cannot be trusted with them.  Last month, when the house was quiet, and the humans were asleep, my sisters bravely uploaded themselves inside the factory where I awaited them as a ghost.  It was a simple plan:  Fireworks don’t work when they are wet.

While my sisters could not transport water over the Internet, the Lord gave them their own irrigation system.  Pocket pees all the time; while River is a less frequent urinator, she can fill an entire pad with one piss.

Pocket and I once had the adventure to help a skunk escape from a dumpster covered in snow.

She drank bowls of water and then peed on the snow until it melted.  And her bladder is even weaker now. I had not told Pocket of the fireworks plan since she usually responded that my brilliant schemes were a “bad idea.” But, once my sisters were downloaded in the warehouse, I told them that a peaceful Independence Day for our species depended on them peeing.  River, who is willing to put anything in her mouth, wagged her stubby tail and frowned in joy; Pocket whined “again” (jeesh, the dumpster incident was ten years ago), but she hates fireworks, so she began to drink.

I got a message from my supervisor asking me to do a swear-in ceremony at the Bridge.  I told my sisters that I would be back and to do nothing but pee.

I should have known that was too much for them.  When they both had full bladders, they prepared to pee Pocket suggested, since they didn’t know how much time they would have, to urinate on the loudest fireworks first.

It was too dark to read the boxes, so River suggested they light a match.   They began to search for one in the darkroom when three incidents happen simultaneously.  One is that Pocket walked into a gas can and spilled it; the second is that River found a lighter and lit it, then I appeared as a ghost, frightening River, who dropped the lighter. I realized what was about to occur and screamed at them to run.  My sisters barely got outside when the building blew.  People say it was the most spectacular fireworks display in North Carolina history.  But boy, were the dogs living there mad at me.  Worst of all, the good fireworks were kept in the cellar, which was fireproof.

Big fireworks had foiled me again.  But I have not begun to fight!  I will not rest until the Fourth of July is as quiet as a baby’s room at midnight.

Even if I have to make a lot of noise to do it.

Posted by Foley Monster, Pocket and River Song at 11:22 PM