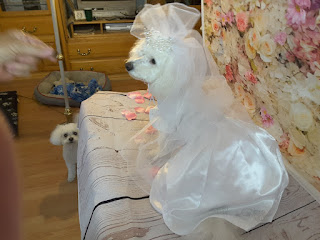 Hobo Hudson fidgeted with his cummerbund.   The nervous groom began pacing again as he waited for his bride to cross the Bridge.  “What if Lily doesn’t want to marry me again?” He asked for the third time.

I told him she had on the mortal side, so there was no reason to think she wouldn’t do the same at the Bridge.

“She was just taking pity on a foolish old dog,” he sighed dejectedly.  “It said in the vows ‘til death do you part. Well, I upped and died, ending the union.  Whoever wrote the vows put in a heck of an escape clause.”

I reminded him that last week he had gone into Lily’s dreams and proposed again.

“That was before the great separation. Such an event can change any dog’s mind—especially  Lily when she was separated from her mom.

For 17 years, Lily had been her mom’s constant.  No matter how bad her day was or the losses she faced, Lily was always there to make the circumstances a little easier to endure.  Is there anything more valuable?  Lily filled a lot of her mom’s needs.  She was a pet, a daughter, a friend, a confidant, a co-worker, a travel companion, and a reason to continue.  And, her mom filled the same role as Lily.

There were other dogs in the pack, and they were all loved and could not have had better homes, but Lily and her mom shared a heart, and the tiny white ball of love took it with her when she departed.  Lily had guided her mom through the darkness when other members passed, but now, despite having dogs at home who want to help, Lily's mom can’t help but feel she must walk it alone.

Lily made her final departure.   Then on Friday, Lilly’s mom made the hardest decision of her life and took on all of Lilly’s pain and suffering so her child could be free from it. The doctor administered a single shot, and Lily full over the rainbow.

Usually, I meet the new angels at the landing named after the distinguished groom, but Lily was greeted by her best friend Hattie Mae at his request.  They held one another and cried as tears of rain released by clouds that traveled from the mortal side mixed with theirs. Hattie took Lily by the paw and led her to the seamstress’ cottage for girl talk, cookies, and more tears.   She kept one secret from the new angel.   Hobo wasn’t preparing their house for Lily but waiting for her at Smoochy’s cathedral at the Doggyspace section of Rainbow Bridge.

When Hattie determined Lily was ready, she showed her the wedding gown Hattie had specially designed for her. It was quickly the most stunning garment Hattie had ever created.   Then they hurried to the cathedral where Hobo waited with his groomsmen. Leo, Tommy, and Lily’s brother Linky.

Josie, Shiloh, and Smartie served as bridesmaids, and seated in the congregation were every dog who had posted on social media and since passed over.  Lily appeared looking like the most angelic angel ever, and Hobo let out a soft cry mixed with a sigh.

Aretha Franklin, who Hobo knows through a business deal, led the choir:  singing All 4-One’s “I Swear” as Lily walked down the aisle. I made the ceremony as brief as possible because I was certain Hobo would pass out from nerves exhaustion.

I only made one change.  I switched from death they do part to they shall never be parted.  Then the couple walked up the aisle together:   Husband and wife for eternity.  Tommy had arranged a car for them.  Hobo climbed behind the wheel, and Lily slid into the passenger’s seat.  He started the car, and it flew into the air like Danny squiring Sandy in Greece.  Hobo had arranged a honeymoon at the finest resort on the moon because he loved her to there and back.

I wish our humans could have seen the happy couple and witnessed when all the sorrow turned to laughter in a world without end.  Amen.